It Seems Everyone is a Terrorist Now Days

Following the tragic shoot-down of Malaysia Airlines Flight 17, Vitaly Nayda of the Security Service of Ukraine, told a news conference, “We have compelling evidence that this terrorist act was committed with the help of the Russian Federation.” It seems the term “terrorist” has become rather devoid of meaning. Apparently Nayda was referring to social media posts by Igor Dirkin, leader of the Donbass separatist group that initially took credit for downing what they then thought was a Ukrainian military aircraft. The separatists later denied involvement once they learned a civilian airliner had been destroyed.(1)

Who are these Donbass separatists? They are comprised of the Donetsk and Lugansky People’s Republics, pro-Russian groups who would like to see two eastern regions of the Ukraine, Donetsk and Luhansk Oblast, secede from Ukraine like Crimea. They gained attention for seizing the Donetsk Regional State Administration government building and several other government buildings in the wake of the 2014 Ukrainian revolution. In continued fighting between the pro-Russian separatists and  Ukrainian military personnel, at one point separatists captured the main terminal of the Donetsk International Airport and shot down a Ukrainian Air Force Ilyushian Il-76, large military transport carrying troops and military equipment.

What the separatist lack is any compelling religious motivation or desire to attack civilian targets. In addition to the Ukrainian military troop transport, the day prior to the downing of Malaysia Airlines Flight 17, insurgents had successfully shot down a Ukrainian Su-25 attack aircraft. Initial indications seem to indicate this political, revolutionary group thought they were targeting yet another Ukrainian military transport.(2)

In what sense are they “terrorists”? Apparently only in that they want their region to be part of Russia. The Oxford Dictionary defines “terrorism” as “the use of violence and intimidation in the pursuit of political aims”.(3) It would seem it is time for a better definition. The American colonies were willing to use force to secure freedom and liberty.  Americans tarred and feather British sympathizers. They were “revolutionaries” but they were not “terrorists”. The southern states had a strong political opinion on state’s rights and were willing to leave the Union to protect them. They were “secessionists” but they were not “terrorists”.

To put it in perspective, the 298 casualties of Flight 17 only barely make it the deadliest airliner shoot-down in history. Until this month, that dubious distinction was Iran Air flight 655 that was shot down by the U.S. Navy. The Navy mistakenly identified the Airbus A300 as a hostile Iranian Air Force F-14 fighter jet. All 290 onboard were killed. Yet, no one would say the U.S. Navy is a terrorist organization.

No one except perhaps Iranian mothers who lost their only sons. This brings us to the problem of cavalierly labeling things “terrorist” acts. Whether on the lips of Iranian mothers or Ukrainian diplomats, it seems the word terrorist has been watered down to mean anyone who disagrees with your political viewpoint. The downing of Flight 17 was very sad byproduct of the ongoing military conflict in the eastern Ukraine but it was not an act of terrorism.

Certainly there are Jihadist willing to take down civilian commercial airliners as the world tragically saw on 9/11. The problem is when we label any border skirmish or political upheaval as “terrorism” it masks the nature and extent of the problem. This makes it easy for New Atheists like Sam Harris to make bold statements like religion is “antithetical to our survival” due to terrorism.(4) However, the reality is much of what is being labeled “terrorism”, such as the tragedy of Flight 17, has nothing whatsoever to do with religion. The reality is the elimination of religion would have contributed absolutely nothing in preventing the tragedy of Malaysian Flight 17. The tragedy reminds us that terrorism is not synonymous with religion.

The story of God commanding Abraham to sacrifice his son Isaac is frequently raised by unbelievers as an example of allegedly inconsistent morality in the Bible.  I heard this argument again last night from my deist friend, Garin Hoover, host of the Garin Hoover radio show.  After discussing it for almost an hour, we had to leave it with “let’s agree to disagree”.  Here are some exerts from our discussion:

Since we are on the subject of cruelty, imagine the cruelty of tying people’s hands and feet with rope then throwing them in a pool.  Then imagine standing back and watching while some of them managed to tread water despite being tied up while others were “popping up to the surface like goldfish corpses”(1).  What kind of evil, demented person would torture people by throwing them into a pool tied up so that they nearly drowned? 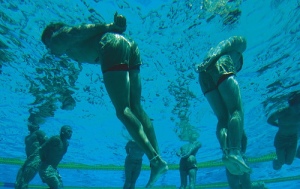 Turns out this is a routine practice of one of the most honored, respected and revered military units, the Navy Seals.  In a training event called “drown-proofing”, SEAL candidates are forced not only to swim with their hands and feet bound but perform tasks like tying knots underwater.  Some pass the test.  Others pass out — underwater — and must be rescued and resuscitated by divers with SCUBA gear waiting nearby.  Without the SCUBA diver’s intervention, some would otherwise drown.(2) The point of “drown-proofing” is, as the name implies, to give Navy SEALs confidence in their ability to swim further, hold their breath longer, and accomplish more than they ever dreamt possible.

It would appear something as indefensibly “cruel” as tying someone up and throwing them in a pool may not be so cruel after all if there is a higher purpose.  Of course, throwing a bound man in a pool for the purpose of drowning him or watching him suffer would be diabolical.  However, if the purpose is teaching him valuable lessons about himself, it can be a right of passage toward becoming one of the most honored professionals in the US Navy.  It turns out it is a necessary step in determining whether the soldier is deserving of the title “Navy SEAL”.  The test answers the question whether he is capable of the missions soon to be assigned him.

In the words of D.A. Carson, “A text without a context if a pretext.”  Whenever the Abraham passage is raised, it is ALWAYS taken out of context.  What was that context?  Abraham’s desire to torture his son?  Was it God’s sadistic desire to watch Abraham squirm?  If you believe the New Atheists, yes.  However, they completely miss the point of Abraham’s “training” event.  The context is spelled out quite clearly in Genesis 22:16, “because you have done this thing, and have not withheld your son, your only son, indeed I will greatly bless you and I will greatly multiply your offspring.” Like the honor of bearing the title “Navy SEAL”, a great honor awaits Abraham if he can pass the test that proves he has the right stuff.  God wants to make Abraham exceeding wealthy and the father of a great nation, the Israelites.  However, only someone willing to fully trust God with everything is prepared for the responsibility such blessing entails.  You do not become a Navy SEAL simply by swimming a few laps.  You do not become the father of Israel without being tested.

The close parallelism with the testing of SEALs even comes down to the details of the angel of the Lord on standby to make sure Isaac is not in any real danger in much the same manner as the SEAL instructor is swimming nearby in SCUBA gear ready to shove his standby regulator in the mouth of a soldier who doesn’t have what it takes to pass the test.  In both cases, Isaac and the SEAL candidate, there is a savior waiting in the wings.

What about the (alleged) psychological scarring this would cause Issac?  This objection commits the logical fallacy of Argument from Silence.  It not only makes claims based on elements not in the story.  It actually argues contrary to the story.  The picture of a Issac kicking and screaming, emotionally scared for life is merely an external imposition forced upon the story in conflict with the record of the actual event.  At this point, Abraham is very old (Genesis 18:11).  According to the Seder Olam Rabbah, Isaac was 37 years old at this time.(3)  In his advanced age, Abraham is in no way capable of forcing Isaac to lay down his life against his will.  Abraham is too feeble even to carry the wood for the sacrifice! (Gen. 18:6)  In no way is Isaac some helpless victim forced to comply against his well.  Indeed, he is unbound the entire time Abraham is building the altar and arranging the wood (Gen 22:9).  A terrified, unbound son would have had more than ample time to flee.  To make this clear, the story specifically states he is not bound until the last moment when an animal would normally be bound to keep it from leaping off the altar.

The New Atheists attempt to completely re-write the story.  They speak as if Isaac was a small child, carried up the mountain bound in ropes against his will.  This false picture is the complete opposite of the account.  If they have a contrary record of the event, they should present it.  Until then, we must judge it based on the only account that we have, an account which gives us no valid reason to suppose Isaac was anything but a willing accomplice in the matter.  An action for which it should be noted he was rewarded.

Richard Dawkins has complained that God has not offered enough proof of His existence.  In The God Delusion he states, “If he existed and chose to reveal it, God himself could clinch the argument, noisily, and unequivocally, in his favour.”(4) Because of his faith, Isaac was rewarded with that unequivocal proof so many of us long for.  For the rest of his life, when hard times like famine arose (Gen. 26:1), Isaac had incredible confidence and comfort knowing that the God of the universe was real and was on his side.  Imagine the reassurance.  Imagine the peace in knowing without any shadow of doubt God would always be there to spare you life, not just as some conceptual hope but because you experienced it first hand.

In closing, this story is not moral inconsistant as my friend alleges.  Child sacrifice was clearly forbidden in the Bible, even in the supposedly “barbaric” Old Testament (Lev. 18:1, 20:1-5; Deut. 12:30-31, 18:9-12, 2 Kings 12:1-6).  Abraham is the one lone exception where God seems to require it. It is a special case because God knew Isaac would not die and he had a specific reason for testing Abraham because he planned on blessing him.  It is not a prescriptive command that anyone else should follow (as opposed to all the verses I just cited which are prescriptive NOT to sacrifice children).  It is a descriptive report of a particular incident.  Because it reports a specific incident, we must consider the context of that incident.  We must consider context because, as we see from the Navy SEALS, just like we cannot make the over-generalization, “tying people up and throwing them in a pool is torture”, we cannot make the over-generalization Abraham abused Isaac until we understand the reason, how old Isaac was, what was Isaac’s level of compliance, and what good came out of it in the end. All these considerations the New Atheists conveniently ignore because the facts do not fit their preconceived narrative which they would like to force upon the story.  They simply ignore the details because they would prefer to impose their own version. 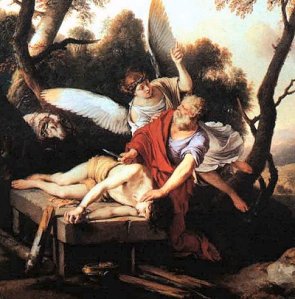